Behind every great man is a great woman — but behind every great rider is a highly-skilled photographer crouched at the bottom of a set of stairs, suffering from back-ache after lugging a massive rucksack around all day.

In the case of the Standard army and the Base Brooklyn team back in the late 90s, that highly-skilled photographer was none other than Tedd Nelson.

Combining high-action fisheye shots, candid documentary photography and graphic design chops seldom seen in the world of 20-inch wheels, Tedd’s photos and adverts managed to achieve the near-impossible, and make riding look as good as it actually is.

So without further rambling, here’s a few gems from his archives… 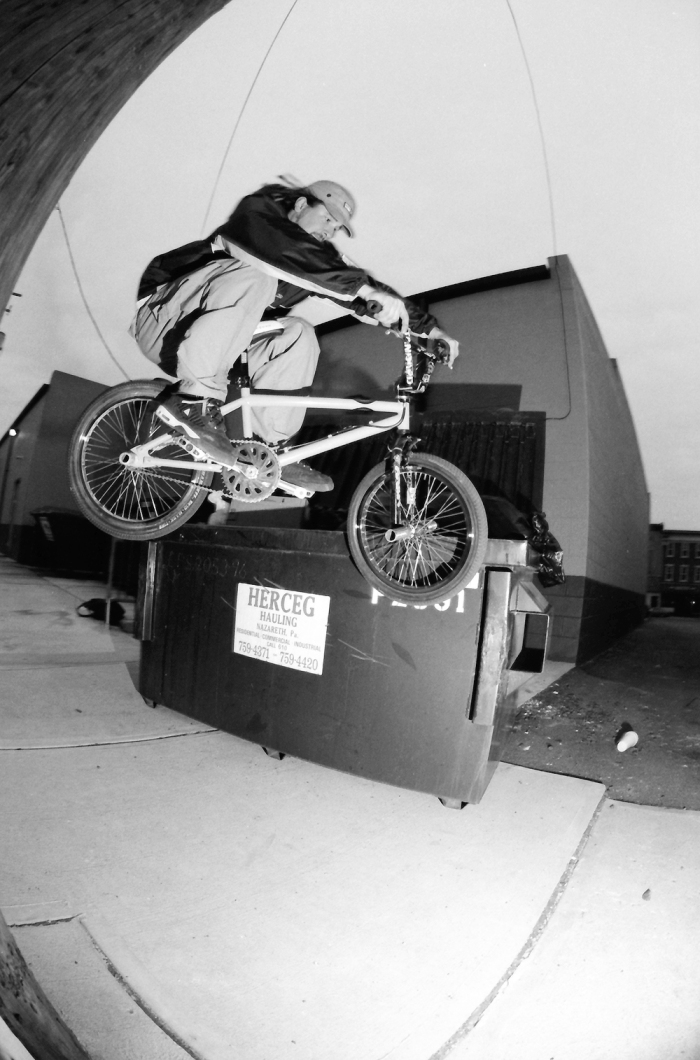 I got in touch with Luc-E last night and we tried to remember something from this day. We think that it might be 98/99 on a filming trip for Standard. Mark Choquette was with me and Glenn Milligan on our way back from Iowa. It was a real quick stop in Bethlehem. Luc knew of this curb-cut by a dumpster that he wanted to do something on. I think we might have hit one or two other spots then we were out. I hadn’t realized this photo was at least 20 years ago until trying to reviewing it with Luc-E and Mark. Man, time flies.

He was always super cool and chill. I got to follow him and Butcher around a few times and it was always interesting to see what they would come up with. It was like when you first get into riding. That feeling. They were just playing around.

This was towards the end of the session, Robo racked himself pretty good. I just remember him taking the time to place his bike before he “walked it off”. I’m pretty sure this was used as a background shot in an old Base Brooklyn ad in Ride UK at one time.

The old Base and Standard adverts had some particularly strong design. What was the inspiration for that stuff?

Thanks. The inspiration was always to try to take the time to make both Base & Standard look as good as possible. I’m not a big fan of the word “brand” but, I guess I always wanted to help them both build their brands in a positive way.

When I was younger, I always got stoked on cool looking ads in both BMX & Skate mags. I guess I just wanted people to feel the same about both of them as well. Another really big influence was to make sure all the riders were always well represented.

Design wise I’d have to say I was influenced by anything from Wizard Publications, Bob Haro, Eric Haze, Andy Jenkins. Anything you see from Andy Jenkins pretty much makes you want to go make something. Will Smyth’s stuff was big too, love Will’s layouts. Dig itself was a big influence. As far as magazines, some of the Pro Spotlight Interviews in Transworld were pretty rad. SLAP was another magazine that had cool layouts, real cool vibe and always different. That was cool. 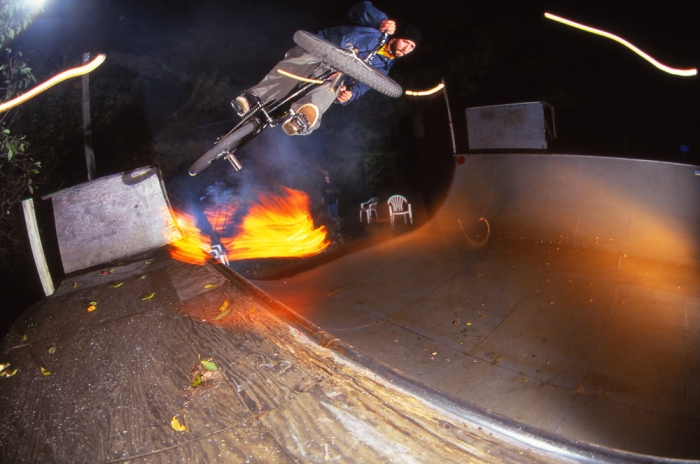 Mark on his back yard ramp. I always love that his girlfriend, and now wife, Michelle is throwing a Christmas tree on the fire. I love that this could have been anybody’s ramp.

At one point this ramp was housed in the Playground Skatepark in Wallingford, Connecticut. When the Playground unfortunately had to close their doors in the mid-90’s, everyone had a chance to take this ramp home.

Anyone could have made this ramp their own, you just had to get out of the Playground. Mark was the one who could put the desire and all of the resources together to get it done.

Even now, these photos hold up really well. They’re not just nostalgic artefacts of the time, the quality still looks amazing. What sort of cameras were you using back then? What was your usual set-up?

I started shooting with a Minolta X-370 that my Mom gave me for Christmas my senior year in high school. I shot with that for a quite a while. I got a Hasselblad 501CM with a 80mm when I moved out to Iowa but my main camera in between those two was a Nikon F4s. That camera is a workhorse. Still use it today.

Back then my camera bag most likely had the F4, a 28mm, 50mm, 80-200mm, and a 16mm fisheye, either a Sunpak 555 or a Metz 60 CT flash. I used a radio slave set up for a while before getting some pocket wizards. I had some old flashes that I used as the slaves, a Vivatar 283, a Canon 560, and a Nikon SB-26 that I would use as an on camera flash from time to time. Oh, and of course a Minolta IV Light/Flash Meter. Not all at once but, some assortment of that was in my bag. 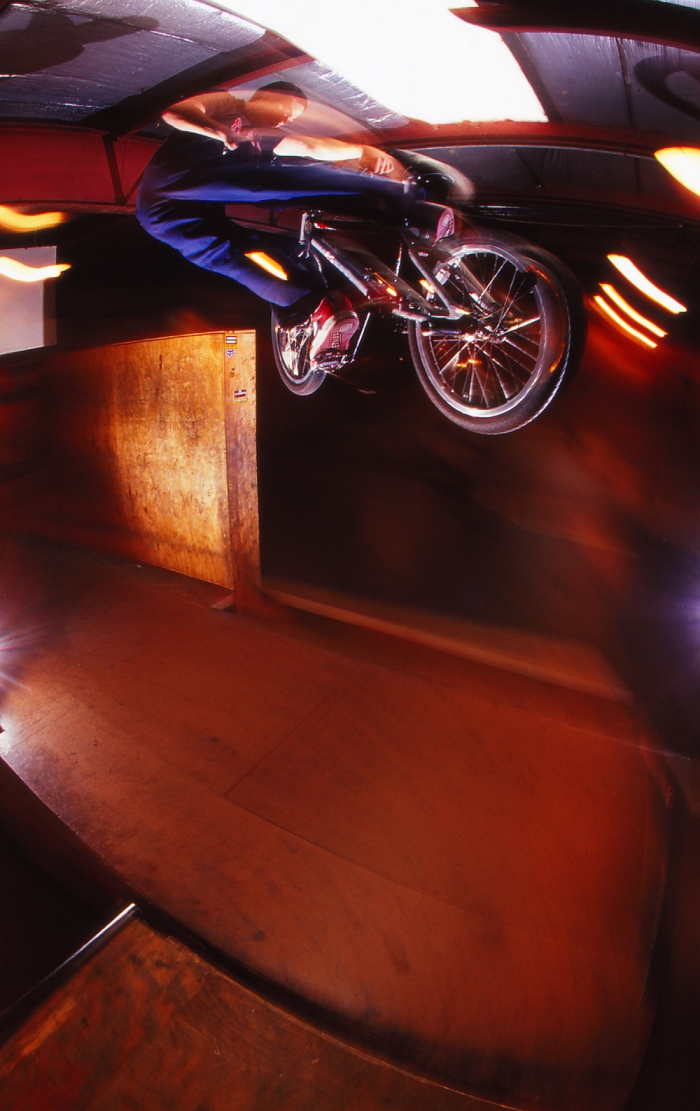 While spending time in Iowa I always loved shooting with Billy. As co-workers we’d talk out ideas during the day then head over to Rampage after work. Usually it would involve something pretty creative. I think that was one of the reasons I liked shooting with him so much. He’d visualize something that no one else was even close to thinking about.

This photo is of a transfer out of the mini and into a newly built street course. I know it has been quite a while since this photo was taken and he is not a kid anymore but, he’ll always be a creative, funny-ass, rad kid who is way underrated to me. 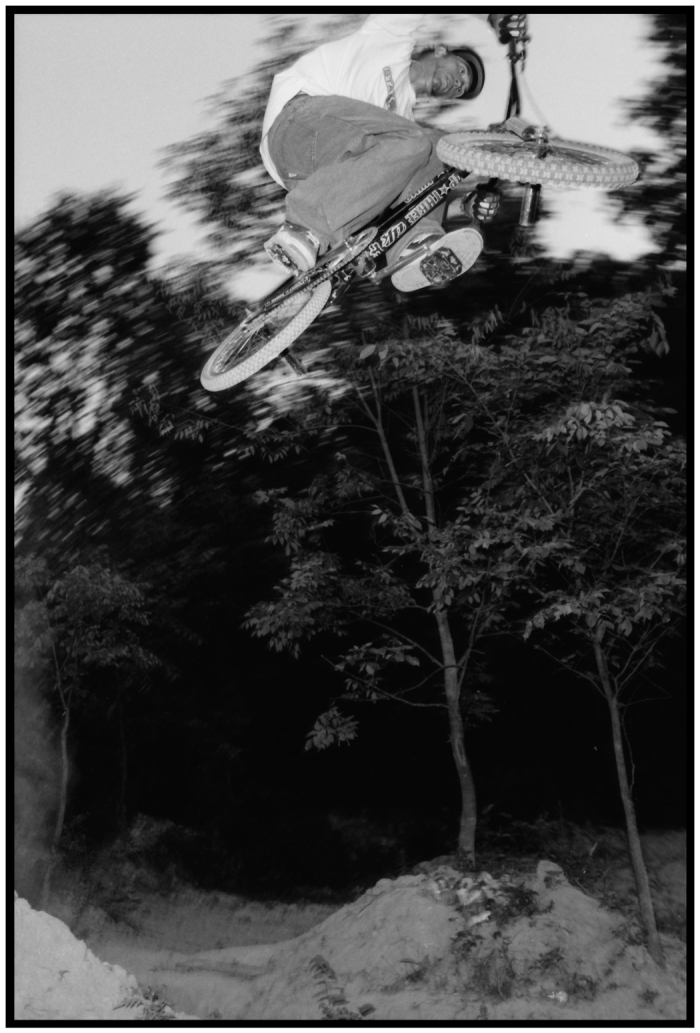 I’d always see Mike Hummel at East Coast Nationals in the early 90’s. He was always super cool to talk with. He was one of the good guys you’d never root against. When this photo was taken during a Standard Country filming trip, it had been four or five years since I had seen him last.

When Glenn Milligan, Groundchuck, and I rolled up to the 981 trails, Mike and Punjab were already there. They were their trails so they were probably getting them ready. I just remember being stoked to see Mike and didn’t want leave without a couple of photos of him. Ya gotta love that Pittsburgh Moto style. 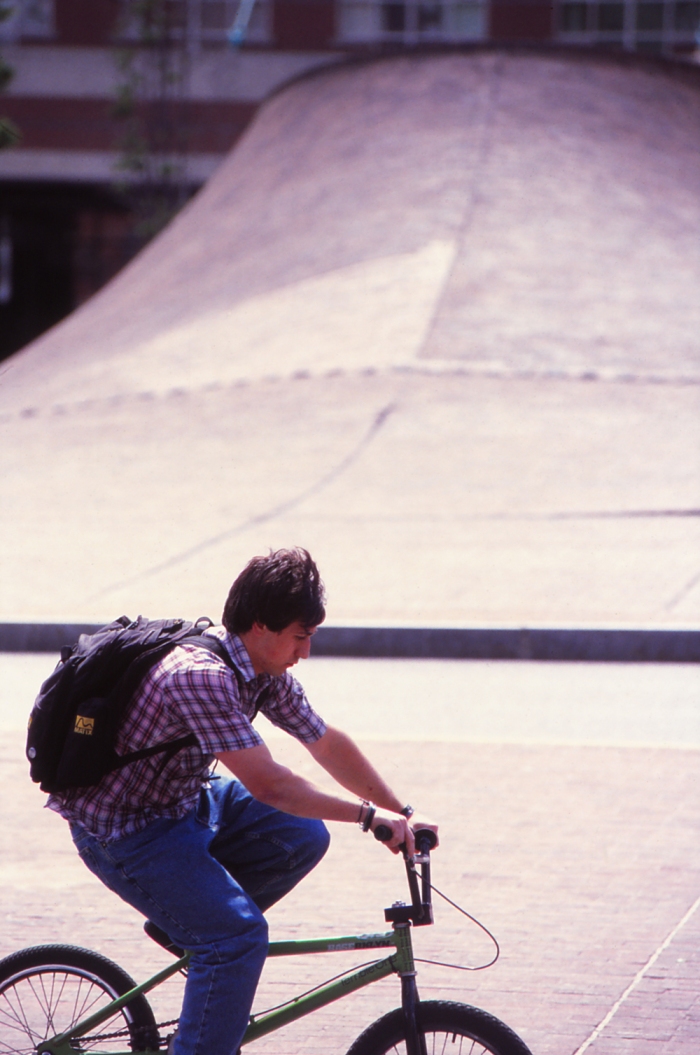 Boston’s Hospital Banks were one spot that everyone on one specific New England Base BKLYN filming trip wanted to hit. Here Keith Terra is most likely thinking about how we’re going to get past security on this one. Unfortunately on this day security won. The spot was a total bust. The trip was a blast though, some of what can be seen in Neighborhood Superheroes.

Was it a conscious decision to shoot a lot of ‘lifestyle’ stuff too? Was it important to show more than just the action?

I guess it was to some degree. I didn’t go looking to set stuff up but, if something interesting was going on, something that somebody might dig having a photo of then, I would just go ahead and try to find a good way to shoot it. I think I just looked at it, and still do, that taking photos of my friends was important. Most of my friends would do interesting things on and off their bikes. I just wanted to capture them doing whatever.

Looking back, I really wish I had shot a lot more of that kind of stuff. I think it is almost as important as the riding. You can get a better sense of who someone is, or what they are interested in by looking at non-riding photos. I think their should be a good balance of both I guess.

Whenever I got opportunity to shoot with Paul I never tried to rush it. I’d try my best to acclimate myself to his schedule. You have to respect a man’s ritual. So by the time we shot this I was sleeping most of the day and shooting with him at night.

This photo was taken at his request, he wanted to shoot in front of Chicago’s Union Station building. I do remember he told me that The Untouchable’s famous “Baby Carriage” scene was filmed just inside but, I think Paul just really dug the spot. I was always honored to shoot with him, and miss those days of hanging out with Mr. Osicka quite a bit.

Some t-shirts featuring Tedd’s classic shot of Luc-E are available now over in the shop. See them here.